The UNC World View Global Music Fellows Program: Integrating Global Music across the Curriculum with the Music of Abigail Washburn and Wu Fei

The Global Music Fellows program was an interdisciplinary professional development program facilitated by World View in collaboration with Carolina Performing Arts and funded in part by the Carolina Asia Center. This program enhanced educators’ global competency skills and expanded their pedagogical toolkits for integrating music into their curricula. This program culminated in the creation of a comprehensive teaching toolkit with background information, lesson plans, learning activities and educator resources designed to integrate global music into K-12 and community college classrooms. The teaching toolkit accompanies the Smithsonian Folkways album Wu Fei and Abigail Washburn, released in April 2020.

Integrating global music into classroom instruction provides a gateway to exploring and connecting across cultures. Music has always been a vital part of human expression. It has the power to engage, motivate and inspire students and builds bridges between both what is familiar and what is unfamiliar. The integration of music across the curriculum enables students to engage in rich textual analysis of diverse, interdisciplinary primary source materials, as well further develop global competency skills such as recognizing perspectives and communicating across cultures. 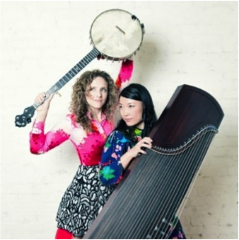 Abigail Washburn, daughter of idealistic, hardworking Midwestern parents from Evanston, IL wasn’t particularly musical as a child–that would come later. As a young girl in Beijing, Wu Fei was a musical prodigy, fast-tracked to be one of the very best musicians in a country of over a billion people. Abigail expected to become a lawyer with the goal of bettering US-China relations. Fei was to become a professional musician performing state-sanctioned works in austere settings. But both women chose a fork in the road. Abigail has improved US-China relations with a banjo not with a briefcase, touring the world and releasing a number of records that mingle Appalachian and Chinese folk music. She is one of the few foreign artists currently touring China independently and regularly and her journeys include a month-long tour (Nov-Dec 2011) of China’s Silk Road supported by grants from the US Embassy, Beijing. Abigail, along with 24 other innovative and creative thinkers worldwide, was named a TED Fellow and gave a talk at the 2012 TED Convention in Long Beach about building US-China relations through music. Visit Abigail Washburn’s website to learn more.

Wu Fei became a guzheng master and multilingual composer of her own works assimilating avant-garde classical and folk music from around the world while retaining her own voice. Her commissions range from a composition for the Percussions Claviers de Lyon (France) that premiered in the Forbidden City Concert Hall in Beijing, to live performances in Paris and Tokyo for Hermès. Wu Fei has composed for Balinese gamelan, symphony orchestra, choir, string quartet, chamber ensemble, film, and modern dance. During this period, Fei toured the world extensively performing at some of the most respected museums, festivals and events. Her time in the States studying free improvisation led her to Boulder, CO where she would discover bluegrass music and meet Abigail. Visit Wu Fei’s website to learn more.

Learn More about the Instruments:

The banjo is estimated to have been used in the Caribbean since the 1600s and brought over to the Americas by enslaved West Africans. Originally, the instrument was used by praise singers in West African tribes. A version of the instrument, the akonting, is still used in tribes today. An akonting is constructed out of a dried and hollowed out calabash gourd with three strings and goat skin stretched across it. The banjo became more popular and spread to many Americans playing the instrument since it was inexpensive to make with a hollowed gourd, horsehair strings, and animal skin. Early on, it was called a “banjar.” Source: https://www.npr.org/2011/08/23/139880625/the-banjos-roots-reconsidered.

By the 1800’s, migration around the United States spread the popularity of the banjo and four string banjos with metal strings became most common. A new way of playing the instrument was popularized by Earl Scruggs. Instead of the typical one index finger striking strings and the sound changed on the neck of the instrument with the thumb, players used three fingers to pick strings. Source: https://banjo.com/sweet-sounds-of-the-banjo-the-history-of-the-banjo/

Originating in China, the guzheng has been used for over 2000 years. No single account has been verified of its true origin, so there are many beliefs as to how it may have been created. One belief is that Meng Tian, a military general and inventor during the Qin Dynasty may have created it with inspiration from the se, another Chinese string instrument. Others believe that it began as a bamboo tube with many strings and no single creator, which was then changed and changed over time. Another origin story was that two people were fighting over a 25-string se and it broke in half, creating two guzheng. Source: https://guzhengalive.com/guzheng-history

Over the two millennia the instrument has been used, more and more strings have been gradually added over history. Strings used to be made out of silk, but are now constructed out of steel-coated nylon. Guzheng today have between 21 and 25 strings, and have a base that is typically personalized with the players own flair and decoration. Source https://www.chinesezither.net/pages/about-guzheng